Iraqi forces are advancing towards Falluja and Ramadi, and today’s reports paint an optimistic picture. Nothing is easy or simple in Iraq, however, and we should continue to expect the unexpected. Winning battles around a city are not the same as winning in urban warfare.

Even an entirely successful campaign in Falluja and Ramadi will not end the war, even in Anbar. It would be a huge hit to Daesh capabilities, and even more to its military reputation, but they still have the far western areas (Hit, Rawa, Rutba, Qa’im, etc.) and can remobilize themselves very soon. Most of the foreign jihadis in eastern Anbar would leave, but some would stay and blend in (cutting their distinctive beards), and the local Daesh supporters will still be in place for a comeback, applying a familiar Daesh strategy. Moreover, as today’s Baghdad reports continue to show, Daesh still has access to the city and can continue to arrange car bomb attacks. 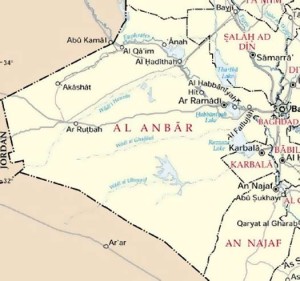 The deputy chairman of Anbar GC says most of Daesh’s foreign leaders in Anbar have run away. He also says some of its Iraqi leaders have started trying to negotiate an amnesty with the security forces. [8th Day News] 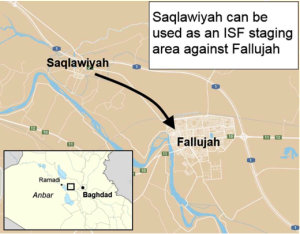 A PMF commander says Iraqi forces crossed the Euphrates River from the Saqlawiya side toward Falluja without facing any resistance. He says Daesh terrorists retreated to the city center. [8th Day News]

Daesh publishes photos of destroying an Iraqi tank with a rocket north of Falluja. [Come to Success]

The PMFs spokesman says the Falluja liberation battle will not be long and will be decided quickly. He says many former security personnel and government employees want to join the Iraqi forces and coordination with them is ongoing. He says Daesh booby-trapped many houses and mosques in the city in order to kill civilians and accuse the PMFs of the crime. [Al-Maalomah]

A source in Falluja hospital says 11 civilians were killed, including 2 women and a child, and 24 injured in the Iraqi forces bombing on Falluja. [Al-Gharbiya News] Other health sources estimated 21 killed and 24 injured. [Erem News]

The Association of Muslim Scholars repudiates the Iraqi forces attack on Falluja and says it might be a revenge operation for the American “defeats” there. [The AMS Website]

DaeshDaily Comment: As usual the AMS never mentions Daesh in the statement. It just says “the number of armed men in Falluja is negligible”. The AMS has always been silent when Daesh or, previously, Al Qaeda in Iraq attacked and killed civilians in Iraq but becomes vocal when the Iraqi forces (or the Coalition before that) counterattacked. It is a propaganda mouthpiece for Daesh as it was for the earlier insurgency. Today’s statement echoes a trend in the Arabic media and social media to focus on the civilian casualties in Anbar.

A Sunni MP issues a statement asking Sunni tribes in Anbar to join the Iraqi forces and fight Daesh. [Al-Maalomah]

The rapporteur of the Iraqi Parliament, a Turkmen MP, says liberating the “snake head” Falluja will be the end of the Daesh project in Iraq. [8th Day News]

Badr militia mourns 2 of its commanders killed in Falluja. [War Media FB Page] We reported yesterday on this battle.

The Security and Defense Committee in the Iraqi Parliament says there is coordination between Iraqi authorities and the people of Anbar regarding the current operations. [8th Day News]

Daesh publishes a photo of a presumably classified document of the Iraqi Military Staff regarding the military operations in Anbar and the date of the attack on Falluja. The report is dated July 11. [Independence News]

A member of Anbar GC says Iraqi forces cleared the Sheikh Masoud area and are advancing towards other areas in east Ramadi. [Al-Maalomah]

An Iraqi Army officer says the Coalition bombed and killed 15 Daesh terrorists who gathered in a mosque in Ramadi center. [Iraq Press Agency]

A video of the results of the Iraqi bombing on Halabsa in Qarma. [The Grand Iraqi Revelation FB page]

DaeshDaily Comment: This seems odd since Dujail and the Khazraj tribe are Shia.

Daesh publishes photos of shelling an Iraqi Army barracks in Huwaish in Salahuddin with an SPG-9 rocket. [Come to Success]

Iraqi Christian MPs say the properties of Christian Iraqis who left the country for security reasons, are being sold illegally by corrupt officials and armed groups. The Integrity Committee in the Iraqi Parliament says it has dozens of complaints from Christians on this issue. [Al-Mada]

Iraq’s Minister of Foreign Affairs asks the Turkish government to help in the fight against Daesh. His Turkish counterpart says Turkey is helping Iraq in this regard and is training 160 Peshmerga soldiers. The statements came after a meeting in Ankara. [Al-Baghdadia News]

DaeshDaily comment: This is the second day in a row with stories about Turkey helping. Up to now, the absence of such developments has been the story. Notice, however, that the training assistance is for the Iraqi Kurds, not the Syrian Kurds. However, what does the following item show?

The mayor of Muqdadiya District says 5,200 displaced families returned to their houses so far. He also says the electricity was returned to 21 villages. [Al-Zaman Newspaper]

A member of Diyala GC says the security situation deteriorated in Muqdadiya because many Daesh terrorists are hiding in Al-Zor sector, 16 km (10 miles) to the north, making use of the natural cover provided by bushes and agricultural fields there. [Al-Sumaria TV]

Daesh claimed responsibility for the car bomb in Al-Khalis. [Come to Success]

Daesh publishes more photos of shelling the Peshmerga in Makhmur. [Come to Success]

Eyewitnesses say Daesh executed a Sunni mosque imam by firing squad in downtown Mosul. The sources say the imam was arrested mid-March for not committing to Daesh instructions. [Bass News]

A tribal leader says Daesh ordered its fighters to withdraw from Mahalibya and Hmaidat areas west of Mosul after they were targeted by local tribes. [Bass News]

A Kurdish field source says Daesh attacked a village in Tal Abyad countryside with a car bomb, then Daesh fighters in armored vehicles attacked the Syrian Kurdish soldiers. The source says 7 Daesh terrorists and 3 Kurdish fighters were killed and the clashes are still going on. [Bass News]

Daesh publishes photos of the fights in Hasaka. [Akbar Al-Muslimeen]

DaeshDaily Comment: The start of this video shows Daesh is getting more dramatic as it goes along.

A Daesh leader in Syria defected with 6 other terrorists and joined Jaish Al-Islam in Qalamoun. Daesh announced a 25,000 USD reward for anyone who brings him in. [Qasioun News]

Daesh says it captured several villages and a Syrian artillery battalion near T4 airport in Homs. [Come to Success]

Daesh publishes a video of the fights near Damascus. [Akhbar Al-Muslimen]

Daesh says it destroyed an Egyptian military bulldozer with 2 IEDs and targeted another military vehicle with IEDs in Sheik Zwaid. [Come to Success]

Daesh publishes a video message to the people of Saudi Arabia to attack and kill the Shia. [Akhbar Al-Muslimeen]

Daesh says it targeted a Houthi police patrol in Sana’a with an IED. [Ana Al-Muslim Forums]

The Tunisian MoI publishes photos of a terrorist describing him as “very dangerous” and asking people to report on him. [Islam Memo]

Daesh publishes a video message to the people of Algeria. [Akhbar Al-Muslimeen]

Daesh publishes a video of the attack in Shbaili in Somalia. [Akhbar Al-Muslimeen]