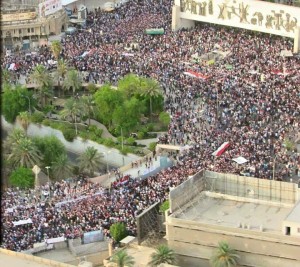 Highlights of today’s developments are the ongoing joint operation to dislodge Daesh from Hawija in Kirkuk province and the resumption of major demonstrations in Baghdad and other cities.

The Iraqi Joint Operations Command clarified the conflicting reports on Americans firing artillery in Anbar. It says the Coalition did not participate in any ground operations against Daesh in Iraq; however, the Coalition used its artillery at Ain Al-Asad airbase to keep Daesh from approaching the base when there was no airpower cover. [Ghad]

Daesh publishes photos of shelling the Habbaniya base with mortars. [Just Paste]

A member of Anbar GC says many officers and security forces members were kidnapped in Baghdad and on the road between Habbaniya and Ameriya and asks the government to protect Anbar people from being kidnapped. [Sumaria]

A Shia member of the Security and Defense Committee in the CoR, refuting previously reported statements, says the PMFs are still in Anbar and there are no American efforts to move them from there. [Etejah]

A local PMF commander says Daesh is on the defensive in Qarma and Falluja after losing many of its terrorists. [Ghad]

The Commander of the tribal PMFs in Anbar says 500 tribesmen from Anbar finished their 30-days training in Taji Camp and will join the Iraqi forces fighting in Qarma. [Baghdadia]

The JOC says today Iraqi forces advanced towards Ramadi (Anbar Operations Command from the north and Anti-Terrorism Service troops from the west) to encircle the city and start the liberation operations. Iraqi forces reached the Olympic Stadium and Zanqoura from the west and Albu Farraj from the north, destroying vehicle bombs and killing many Daesh fighters in the process. [Iraqi Media Network]

The JOC refuted reports about the Coalition stopping its airstrikes on Anbar and says the airstrikes continue in coordination with the Iraqi government. [Mada]

The Anbar Operations Commander says his troops killed 20 Daesh terrorists and wounded others in a shelling on Khaldiya and Juwaiba. He says Daesh lost many men and vehicles in addition to a large weapons storehouse in areas north of Falluja. [Ghad]

The Chairman of the Security Committee in Khaldiya says the battles against Daesh continued around Ramadi and the Iraqi forces destroyed 4 Daesh boats in Hamdhiya east of Ramadi.  [Ghad]

The Jazeera Operations Commander says the Coalition bombed Daesh in Jubba, north of Baghdadi in the Hit District, killing 3 terrorists. The Coalition also destroyed a Daesh weapons and explosives cache in Qusairiyat, in Haditha District. [Mada]

A security source says the Coalition launched concentrated airstrikes on Daesh locations in Albu Hayat in Haditha District. The casualties are so far unknown. [Baghdadia]

The Commander of Al-Asad Brigade, tribal fighters from Anbar, says his troops stopped a Daesh attack on Barwana in the Haditha District, killing 8 terrorists. [Sumaria]

IWMC says Iraqi forces captured a Daesh fuel tanker in the Kilo 160 area as it was heading to Rutba. [Etejah]

DaeshDaily comment. It seems noteworthy and a sign of military progress that there were no reported military battles in the Baiji area.

A local source says Daesh arrested one of its Kurdish leaders and 2 of his associates in Shirqat and took him in handcuffs to Mosul based on orders from Daesh’s leader, Awwad Baghdadi. [Sumaria]

A security source says Iraqi forces supported by the IAA and the IAF stopped a large Daesh attack on the Strategic Line west of Samarra, killing “dozens” of terrorists and destroying their vehicles. [Baghdadia]

UNAMI says 1933 Iraqis were killed or wounded in September with Baghdad being the most affected by the violence. [Mada] By a separate news account, UNAMI says 745 people were killed. [Rudaw] This would leave 1188 wounded if both numbers are right.

A Sunni bloc in the Iraqi Parliament asks PM Abadi for more clarifications about the new coalition with Russia, Syria and Iran. [Sumaria]

DaeshDaily comment. This may reflect the fact that this four-party arrangement can be interpreted as having a sectarian purpose.

A member of the Badr bloc in the CoR asks for a bigger role, including ground troops, for the Coalition in the fight against Daesh.  [Iraq Press]

The MoD says a group of Iraqi soldiers finished their training on urban warfare, and on using SPG-9 rocket launchers. The training was conducted by Australian and New Zealand experts (video). [Baghdadi]

Overall, the IAF conducted 4 sorties and the IAA 10.

The body of an unknown young man was found stabbed to death in south Baquba. [Baghdadia]

An IED exploded in Al-Doulab village south of Muqdadiya, killing a civilian and wounding 4. [Baghdadia]

The bodies of the 3 truck drivers kidnapped yesterday were in found in Imam Wais village north of Muqdadiya. [Baghdadia]

The Chairman of the subdistrict council in Udhaim says Iraqi forces dug a trench several km long, 3 meters (10 ft.) deep, and 2 meters (6.5 ft.) wide to secure the area and to allow the displaced people to return. [Sumaria]

DaeshDaily comment. The real meaning is more like this. The Iraqi forces suspect that many of the returning families are pro-Daesh, but usually don’t know which ones. The trench is intended to somewhat secure the area before people return by setting up a communications barrier to contact between the guilty residents and Daesh fighters. (Yes, we do know this is confusing.)

A security source says Daesh dug a trench in Hawija and filled it with black oil in order to burn it when the Iraqi Joint Forces advance to the city. The source also says Daesh prepared chemical weapons. [Ghad]

An Iraqi JOC source says Daesh deployed snipers in Hawija preparing for the JOC attack. The source also says the Peshmerga deployed more troops to break through the city. He says the Coalition bombed Daesh in Hawija and that the Hawija Salvation Council, a tribal anti-Daesh coalition, is providing the JOC with information. [Ghad]

A PUK official says the Coalition bombed Daesh in Hawija killing 20 terrorists, including Daesh’s security officer in Hawija. The bodies of the dead terrorists were taken to Mosul hospitals. [PUKMedia]

Eyewitnesses say Daesh terrorists trying to escape Hawija to Mosul clashed with Daesh checkpoints that prevented them from passing and told them to go back and fight. They say 30 Daesh members were killed or wounded in the clashes. [Ghad]

The Kurdistan Security Council says Coalition airpower killed Falah Al-Kurdi, a major Daesh Kurdish leader, in an airstrike near Hawija. Kurdi was responsible for Daesh media in Kirkuk and planned 3 major terrorist attacks in Erbil in 2014 and 2015. [Baghdadia]

A security source says the Coalition killed the Daesh military commander in Kirkuk in an airstrike on his vehicle in Hawija. [Mada]

A security source says clashes erupted between Daesh and the pro-Baathist Naqshbandi Army (JRTN) in Abbasi, and 28 from both sides were killed in the clashes. [Mada]

DaeshDaily comment. Another clash between Daesh and the JRTN, their former allies. An explanation of the specific issues would be a clue to the internal dynamic in Iraq. It will not be surprising if the JRTN and other Baathists start to distance themselves from Daesh. They still have to live in Iraq after Daesh is gone.

The Iraqi Special Operations Command says the Iraqi F-16s bombed Daesh in Qayara and Mosul yesterday, killing many terrorists including Daesh’s deputy wali of Qayara, its Dijla wali, intelligence coordinator, a sharia official and its “minister of health,” in addition to destroying a car bomb factory and 8 vehicles. [Baghdadia]

In a remarkable show of defiance, eyewitnesses say the people of Mawali village, 30 km (19 miles) west of Mosul, removed the Daesh flag and raised the Iraqi flag in its place. Daesh attacked the village and arrested around a hundred people. [Karemlash]

Daesh executed 7 doctors in Mosul for refusing to treat its terrorists. [Karemlash]

A local source says Daesh started to collect fees for every newborn, claiming they would give the money to the hospitals’ staff after Baghdad suspended the salaries. Daesh charges 10,000 ID for the boys and 50,000 for the girls. [Karemlash]

A Peshmerga commander says his troops stopped a Daesh attack in Sinjar and forced the terrorists to retreat. [Rudaw]

A security source says Daesh cut off the internet service and started to confiscate laptops and mobile phones from citizens in Tal Afar after the heavy airstrikes on Ninewa. [Ghad]

Rudaw publishes the names of 3 of the Peshmerga beheaded by Daesh 3 days ago. [Rudaw]

The spokesman of the Peshmerga says the Syrian Kurdish forces trained by the KRG will go to Syria based on an agreement between President Barzani and the leadership of the PYD. He says the US played a role in reaching the agreement. [Xendan]

The General Secretary of the Peshmerga Ministry in the KRG says they didn’t receive any weapons from Russia and all the Russian weapons went to Bagdad. He says the only Russian aid they got was some humanitarian help to the Yazidis in Sinjar. [Xendan]

A video of the Russian jets in Latakia. [Erem]

The anti-Assad Syrian Islamic Council says the Russian interference in Syria is a “plain occupation” and asks Syrian people to fight it. [Shahba]

The YPG General Command issues a statement saying the relationships and coordination with the Coalition are good and have produced good results in the battles against Daesh and will continue regardless of the attempts of some fronts to ruin them. [Hawar] Sources close to the YPG says the statement of the YPG Commander about cooperation with Russia was taken out of context. [Hawar]

A local source says the Coalition bombed Daesh in the southern and western countryside of Hasaka. Daesh beheaded 2 people in Hasaka Governorate, accusing them of collaborating with the Syrian government. [ARA]

A local activist says the Coalition conducted airstrikes on Daesh in Shaddadi and other areas in southern Hasaka countryside. [ARA]

A local activist says clashes erupted between local leaders in Albu Muhsen village in Deir Al-Zor eastern countryside because of Daesh’s strict rules. He says 3 people were killed and 5 wounded in the clashes. [ARA]

The YPG says they stopped a massive Daesh attack on Abdul Aziz Mountain, killing 28 terrorists, but 7 Kurdish fighters were also killed. [BasNews] A field source says Daesh detonated at least 3 car bombs in the attack but the Coalition airpower intervened immediately and launched several airstrikes. [BasNews] Another source says the clashes are continuing and Daesh managed to close the road between the mountain and the Assyrian town of Tal Tamr. [ARA]

A military source says a car bomb exploded on a checkpoint west of Tal Tamr, killing or wounding 10 Kurdish fighters and civilians. [BasNews]

Daesh publishes photos of the results of the bombing on Tadif in Aleppo. [Dump]

Jordan. Daesh says the son of Mazen Al-Dhalaeen, a Jordanian MP, detonated himself with Daesh in Syria. The MP had denied earlier reports about his son joining Daesh. [Jordan Zad]  The MP confirmed the reports but said his son was killed in Iraq. [Sumaria]

Saudi Arabia. A radical threatened a mosque imam in Riyadh after the imam criticized Daesh. People in the mosque captured the man while he was trying to escape (video). [Islam Memo

Egypt. Daesh says it destroyed an Egyptian Army M113 vehicle on the road between Arish and Sheikh Zuweid. [Dump]

Daesh says it launched 3 Katyusha rockets on Al-Gora Airport in response to the Egyptian authorities arresting women from Sinai. [Dump]

Libya. The Libyan Minister of Foreign Affairs says there are 5,000 Daesh fighters in Sirte and Derna. [Akhbar Libya]

Heavy clashes erupted again with heavy and mid-size weapons in Derna between the SCMD and Daesh. A SCMD commander says their fighters are advancing against Daesh fighters, who are trapped in the area. [Islam Memo]

Tunisia. A Tunisian court releases the former spokesman of Ansar Al-Sharia, who was accused of supporting Daesh publically. [AfriGate]

DaeshDaily comment: This man is well known as one of the most outspoken people supporting Daesh ideology.