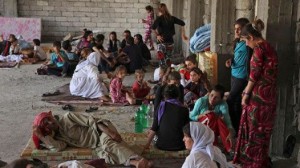 Iraqi forces made a decisive move into the Siniya area in Salahuddin, near Baiji

The MoD publishes a video of a Coalition airstrike on Daesh near Ramadi. [MoD Website]

The Commander of the tribal fighters in Khaldiya says Iraqi forces stopped a Daesh attack in Al-Madhiq east of Ramadi, killing 20 Daesh fighters and destroying 8 vehicles including a vehicle bomb, and 3 weapons caches. [Mada] The Chairman denied reports that American ground troops have participated in the battles in Anbar. [Maalomah]

Jazeera Operations Command troops shelled Daesh in several areas in Haditha district, destroying 4 Daesh hideouts and killing the terrorists inside them in addition to destroying a rocket launcher. [IWMC Report]

A local PMF commander says the Daesh commander in Akashat, Mohammed Al-Eissawi, was killed with 3 of his associates in an airstrike on a Daesh hideout in Al-Waleed. [Baghdadia]

The IWMC says Iraqi forces liberated several areas north of Baiji and cut of the road that links Siniya to Makhoul and Haditha. [Ghad] The IFP commander says his troops captured the road and destroyed 5 vehicle bombs including 3 Humvees. [Baghdadia]

A PMF source says Daesh has now withdrawn most of its Iraqi fighters from Siniya and Baiji and kept foreign snipers and suicide bombers there. [Harbi]

A Salahuddin Operations Command source says Iraqi forces conducted an airborne operation in Siniya and destroyed 10 Daesh vehicles. Iraqi forces also captured 50% of Tal Abu Jarad. The source says the Iraqi Army artillery shelled Daesh in Fatha, northeast of Baiji across the river. Daesh has lost 80 of its fighters in the battles in Baiji so far. [Baghdadia]

The Chairman of Salahuddin GC says Iraqi forces advanced to the northern areas of the Baiji refinery and will liberate the entire district very soon and move ahead to Shirqat after that. [Baghdadia]

The IWMC says the Coalition airpower bombed and destroyed a Daesh oil tanker bomb inside the Baiji refinery. [Mada]

A security source says Iraqi forces broke through Daesh defense lines at the Baiji refinery in an effort to eliminate pockets of Daesh control and put the refinery entirely under government control. The Badr militia commander says Thursday will be the decisive day in Baiji district liberation battles. [Mada]

An AAH source says their troops broke through Daesh defenses at the refinery and the liberation effort is going fast. [Harbi]

A video of the Iraqi forces inside the Baiji refinery. [YouTube]

A security source says Anti-Terrorism troops killed the Daesh commander in Baiji, a Palestinian called Abu Suleiman, and 50 other fighters in the Baiji refinery. [Baghdadia]

IWMC says the Iraqi Army’s 9th Division troops supported by PMFs advanced on the western axis of Baiji and destroyed 4 Daesh vehicles, killing the terrorists inside them. [Ghad]

Daesh says a Saudi and a Syrian launched suicide attacks on Iraqi forces west of Baiji with 2 vehicle bombs, killing or wounding “dozens” of them. [Dump]

A medical source says 7 Iraqi soldiers were killed and 15 wounded in the first day of the second stage of Salahuddin Liberations Operations. [Ghad]

A security source says Iraqi forces captured the Education Directorate building in Baiji center. He also says the IAA is bombing Daesh fighters who run away to Shirqat. [Baghdadia]

A video of Iraqi soldiers celebrating in Baiji center [YouTube]

A local source says Daesh executed 14 of its terrorists in Baiji for running away from the battles in Baiji. [Sumaria]

PM Abadi meets with a US Congressional delegation. Discussion topics include the liberation battles in Anbar and Salahuddin, the government reforms, and US military aid to Iraq. [Xendan]

Speaker Jubouri issued a statement congratulating Iraqi forces on their advances in Anbar and Salahuddin and asks the tribes in Daesh-controlled areas to support them. [AIN]

The Minister of Defense unveiled the statue of Lt. Colonel Ali Al-Nidawi in front of the MoD headquarters in Baghdad. Nidawi became a national hero and a social media sensation in Iraq for his role in the battles against Daesh in Anbar and was killed in a battle in Haditha. [MoD Website]

A video of Lt. Colonel Nidawi’s funeral in January [YouTube]

Overall, the IAF conducted 7 sorties and the IAA 18.

DaeshDaily comment: Earlier the IWMC said the Coalition destroyed 4 vehicles in Albu Shijil alone. Consistency is not one of their virtues.

A security source says 14 Daesh fighters were killed in an airstrike on Hawija. [Maalomah]

Prime Minister Abadi meets with the Ninewa Governor and GC Chairman and other officials from Ninewa to discuss the displaced people issue and the Yazidi kidnapped women. Abadi assured them Ninewa will be liberated soon. [Maalomah]

A PUK official says Daesh shelled the Peshmerga in Mount Bashiqa and the Kurdish forces responded with heavy artillery and rocketing. [PUKMedia]

A Ninewa police source says the Coalition killed Jadullah Abdullah Maarouf, a Daesh top Afghani commander in Ninewa, and 8 other terrorists in an airstrike on Al-Qusiyat north of Mosul. The source also says an IED exploded on a Daesh convoy south of Mosul killing 2 Daesh military commanders. [BasNews]

A medical source in Mosul says the Daesh handled the body of the Daesh emir of Tal Afar to the forensics. The terrorist was killed by a Coalition airstrike west of Mosul. [BasNews]

A YPG commander says his troops killed more than 50 Daesh fighters and cleared 15 hills in Sinjar during the last 4 days. [PUKMedia]

DaeshDaily comment. The YPG’s has soldiers in northwest Ninewa to aid the Yazidis after Daesh captured their villages in Sinjar, and they remained there, protecting the people there and recruiting young Yazidi men and women.

A Peshmerga commander says 67 Daesh members surrendered to the Kurdish forces in Gwer within this week. [BasNews]

Daesh publishes photos of the graduation ceremonies for its first special forces unit in Mosul. [JustPaste]

Daesh publishes a photo of a Peshmerga drone it shot down in Tal Al-Reem. [Store2]

A KDP MP says the KDP will not have Gorran continue to participate in the KRG government coalition because of its role in the violent demonstrations. He says the KDP has photos and videos confirming that Gorran started the violent events. [Maalomah]

The PUK says more than 400 people implicated in the alleged criminal actions during the demonstrations were arrested. [Mada]

The KRG’s Minister of Housing (PUK) says the Gorran ministers still have their privileges and Council of Ministers hasn’t issued orders to fill their positions yet. [Rudaw]

The Muthanna GC voted unanimously to reject the MoI’s decision to fire the Muthanna police chief and says the decision violates the Governorates Law. [Mada]

DaeshDaily comment. These positions were subject to MoI appointment and dismissal until recently. The law, often referred to as the Provincial Powers law, would seem to leave these decisions to the governorates. Al-Maliki resisted implementing it, but Al-Abadi started implementing it earlier this year.

A local source says Daesh captured the Kurdish town of Ihris near Azaz in Aleppo countryside after brief fights with Syrian armed groups. [BasNews] Local sources say the Daesh commander of the area was killed in the battle in Ihris. [Hawar]

A local source says 5 Daesh fighters were killed in a failed attack on the Syrian Army and its militias near Mount Kawaka in east Hasaka. [ARA]

Daesh publishes photos of the results of the bombing on Aleppo’s northern countryside. [ShareText]

DaeshDaily comment: The YPG said yesterday one of its fighters was killed and 3 wounded, in addition to some civilians, in this attack.

The Turkish Prime Minister says he has informed the US and Russia that Turkey won’t agree to have weapons sent to Syria because there is no guarantee that the weapons given to the YPG won’t go to the PKK and be used against Turkey later. He also says both Daesh and the PKK played a role in the terrorist attack in Ankara on Saturday. [Anadolu]

DaeshDaily comment. The real explanation may be that the new US-supported coalition of opposition groups includes the YPG. The YPG is affiliated with the PKK, thus Turkey’s concern that US weapons provided to the coalition forces could end up in the hands of the PKK and used against Turkish citizens.

The PYD President responds to the Turkish prime minister and says the US dropped 50 tons of weapons for them and they will only use them to defend themselves. [ROJ]

Egypt. The Egyptian MoI says a policeman and a civilian were killed and 6 policemen wounded when a roadside IED exploded on a police armored vehicle in Arish, in the Sinai. [Islam Memo]

Somalia. Daesh publishes a video message from its terrorists in West Africa to Somalia. [Archive]